Cat Slimmer of the Year

We would like to celebrate the achievement of Abbey House Veterinary Hospital Head Nurse Jane White and the owners of the late Gonzo-Floyd, who were announced as the winners of the Hill’s cat Slimmer of the Year award, at the BVNA Congress in October.

At his heaviest the 4 year old, black and white domestic short hair cat was 9.82kg with a body condition score of 8 out of 9. He had been coming in for regular appointments with Jane but it wasn’t until 2018 when they switched to Hills Metabolic Diet they started to see a better level of- weight loss. By June 2019 he was 7.5kg and had a BCS of 5. Gonzo-Floyd had managed a weight loss of 23%.

Tragically it wasn’t long after that Gonzo-Floyd was killed in a road traffic accident, but his owners were still to submit his entry in to the competition to highlight that cats can lose weight despite some of the common hurdles encountered such as being in a multi cat house hold and not being able to control food intact and exercise levels and that clever technique of finding other households to feed them! 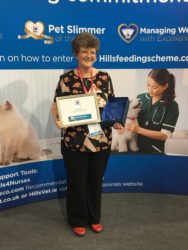 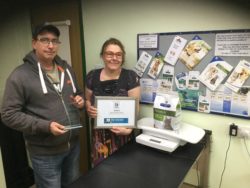